Unfortunately your browser is not supported. If you want to view this site you need to upgrade to a modern browser like Chrome, Safari, Edge or Firefox
Amy Foster
Fine Art
Amy Foster
Safer Than the Land
Fine Art 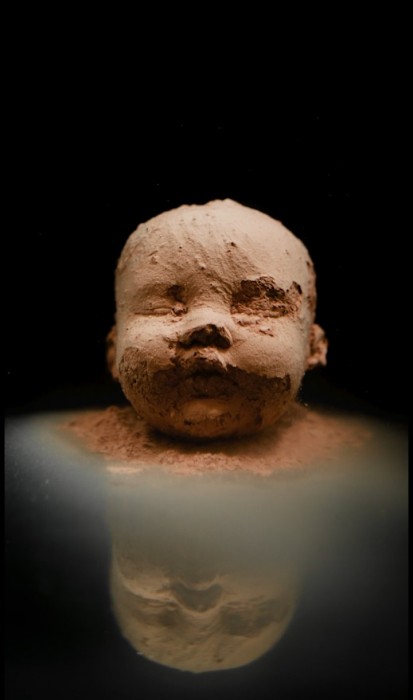 Safer Than the Land

The gradual disintegration of a clay infant head stands for the erosion of Western bystanders’ empathy in the face of the Syrian Refugee crisis in Amy Foster’s video Safer than the Land. A moving contemporary still life, the decomposition of the head meditates on the harrowing journeys Syrian civilians have to make across the Mediterranean sea and, more specifically, three year old Alan Kurdi’s fatal journey resulting in his death on the sandy shore of Bodrum.

Foster is a contemporary political artist and activist, concerned with the devastating events that are taking place across the world as a direct result of warfare. For the past three years she has followed the Syrian Civil War and have drawn from the events within Syria to inform her practice. Currently, she is working alongside Afraa Hashem, a Syrian Activist whose story of protest and demonstration against President Al Assad was shown in the Oscar-nominated documentary ‘For Sama’. 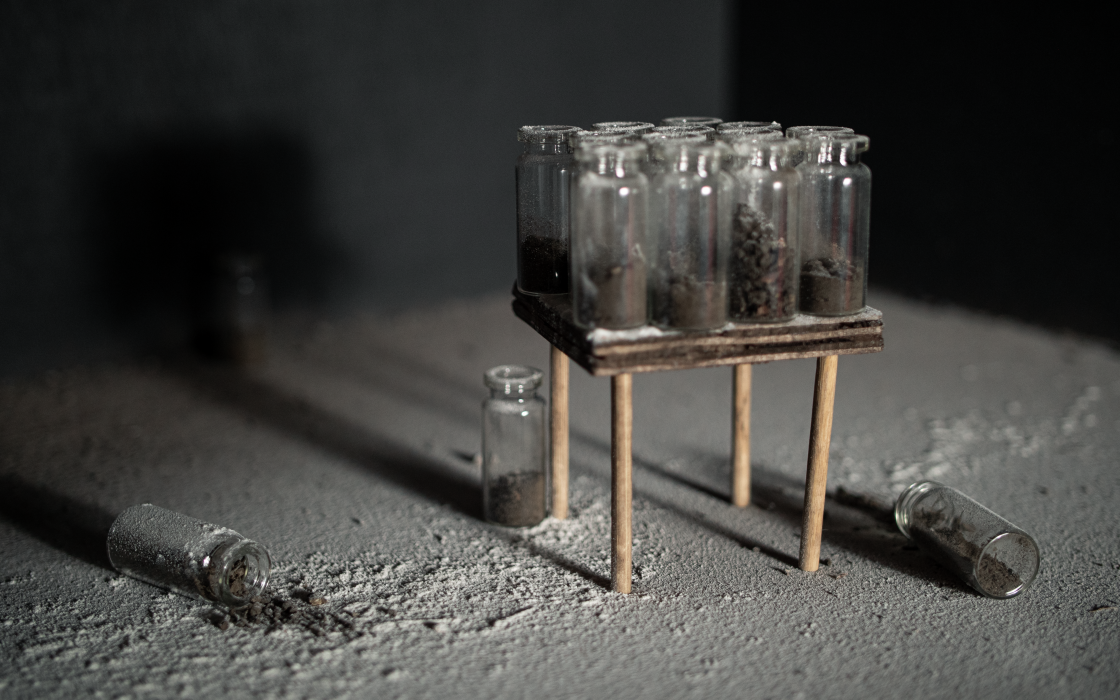 AFRAA
Maquette. 'AFRAA' is inspired by the jars Syrian refugee Afraa Hashem brought back from Syria, filled with soil from the graves of her friends in order to continue to visit and grieve for them after being exiled from Syria. A portion of the jars contain objects symbolic of Hashem's experiences during her time in war torn Syria. When Interviewing Afraa, I was not aware of the long silences that followed every heartbreaking experience she shared but upon reflection, more was said about the relationship and differences between Afraa and myself and the lives we live within every silent moment that passed. Despite being well informed of the tragedies Syria has seen, I began to recognise how sheltered my existence is as a naive middle class westerner. Afraa had stories to tell and willed me to tell them as honestly as I could. To do so I have to acknowledge and be forthright about my response to the tragedies she had survived: ill equipped and inexperienced. 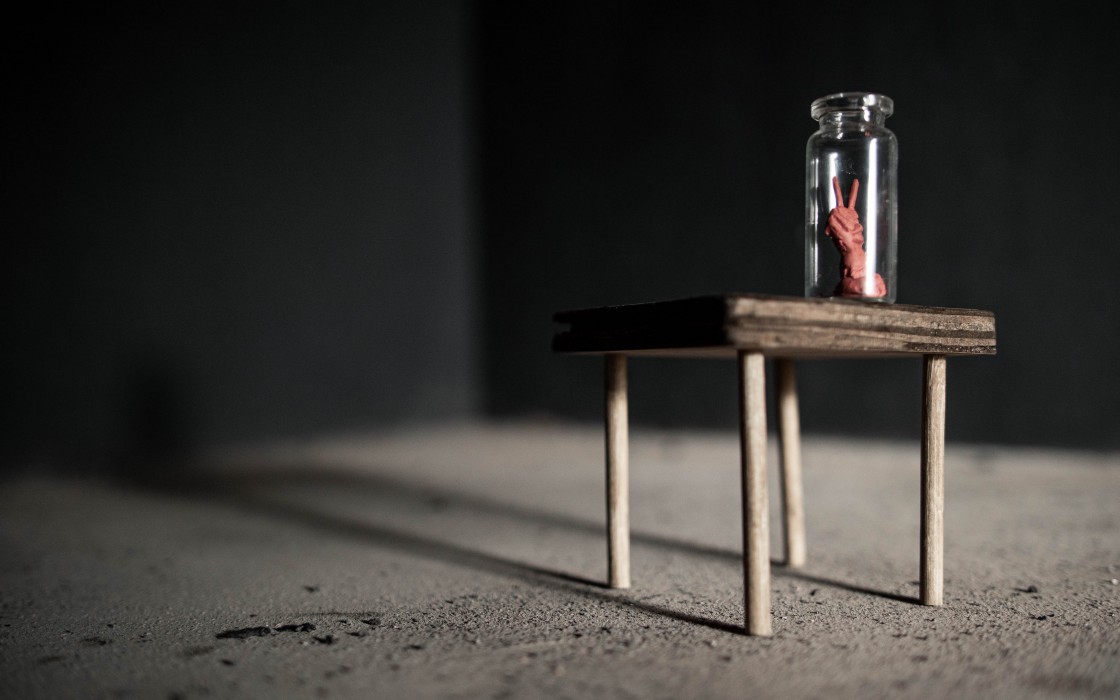 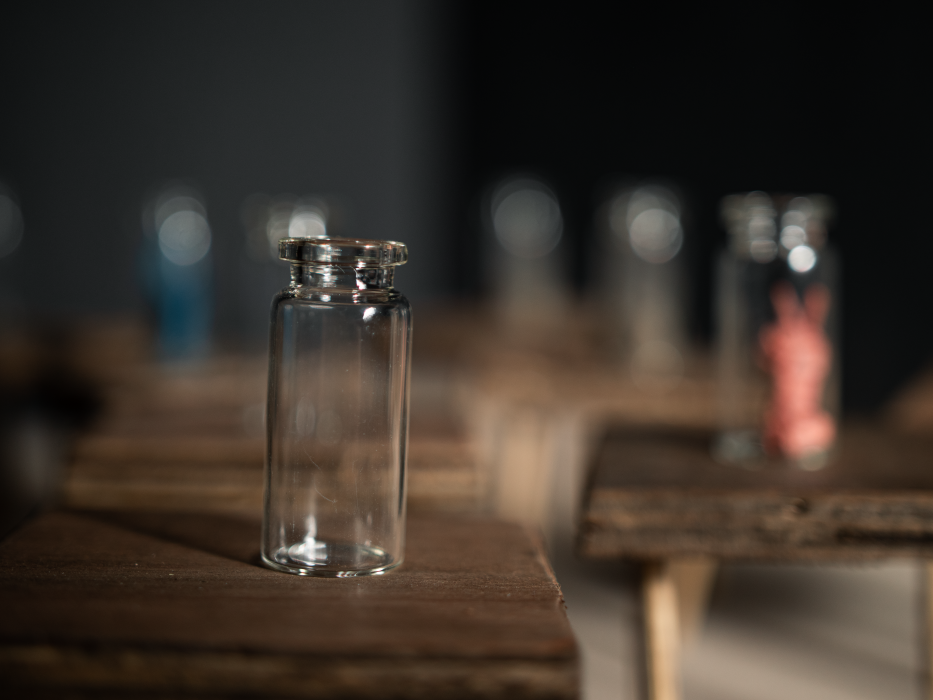 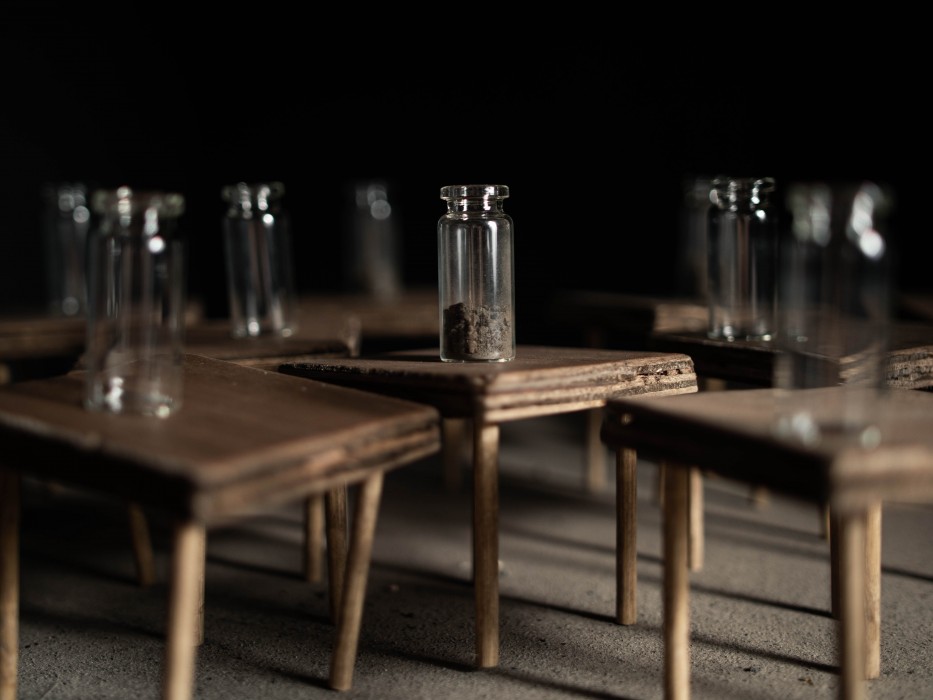 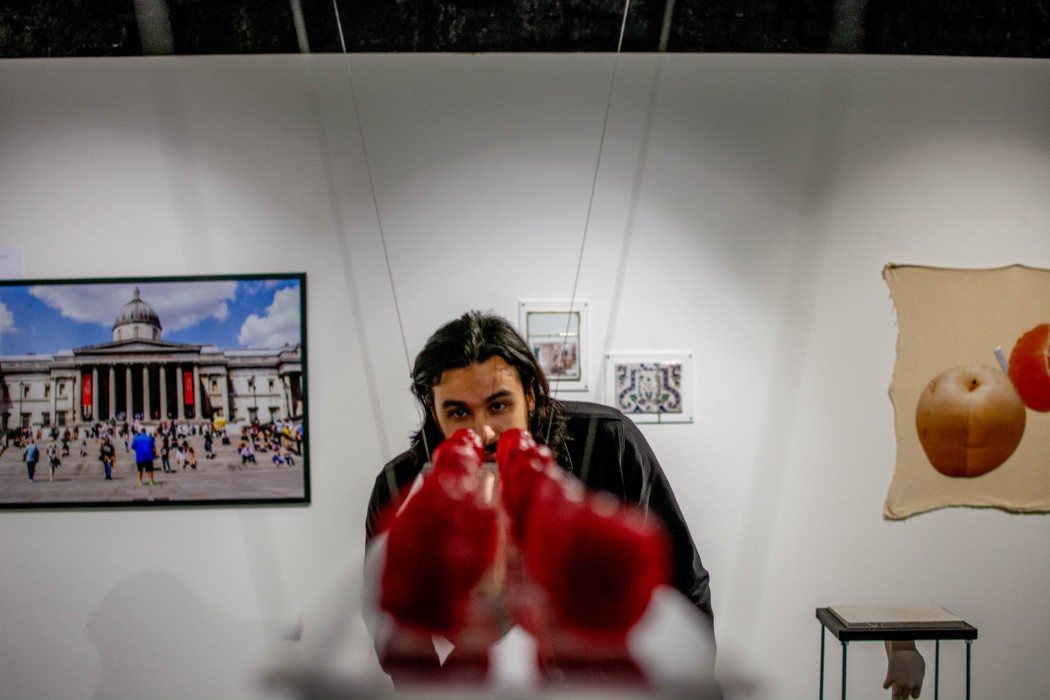 Passivity
Frozen Water on suspended perspex sheet “Inspired by the writing of Susan Sontag - 'People don't become inured to what they are shown, it is passivity that dulls feeling.' Passivity was an experimental work in process exhibition used to analysis how the audience engage with violent confrontational artwork. This work consisted of blood-red frozen heads gradually melting away to form a sheet of red rain that splattered onto a clinical white tray beneath. Symbolic of the fading memory of refugees from our consciousness. Systematically replacing the heads during the exhibition and allowing the tray to spill over, represented history repeating itself.” 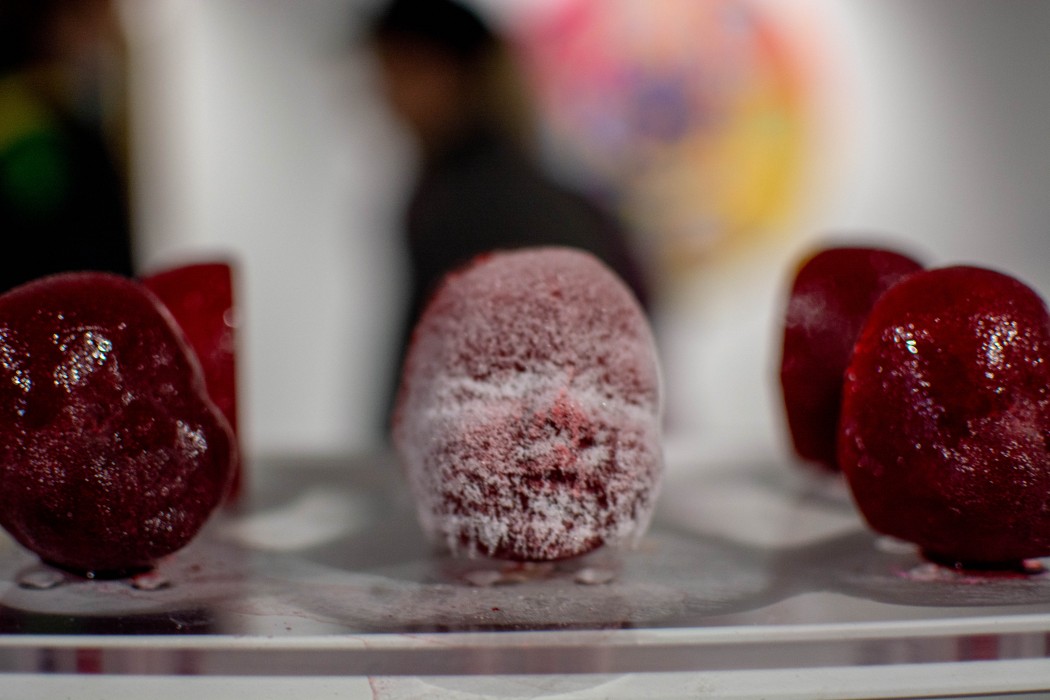 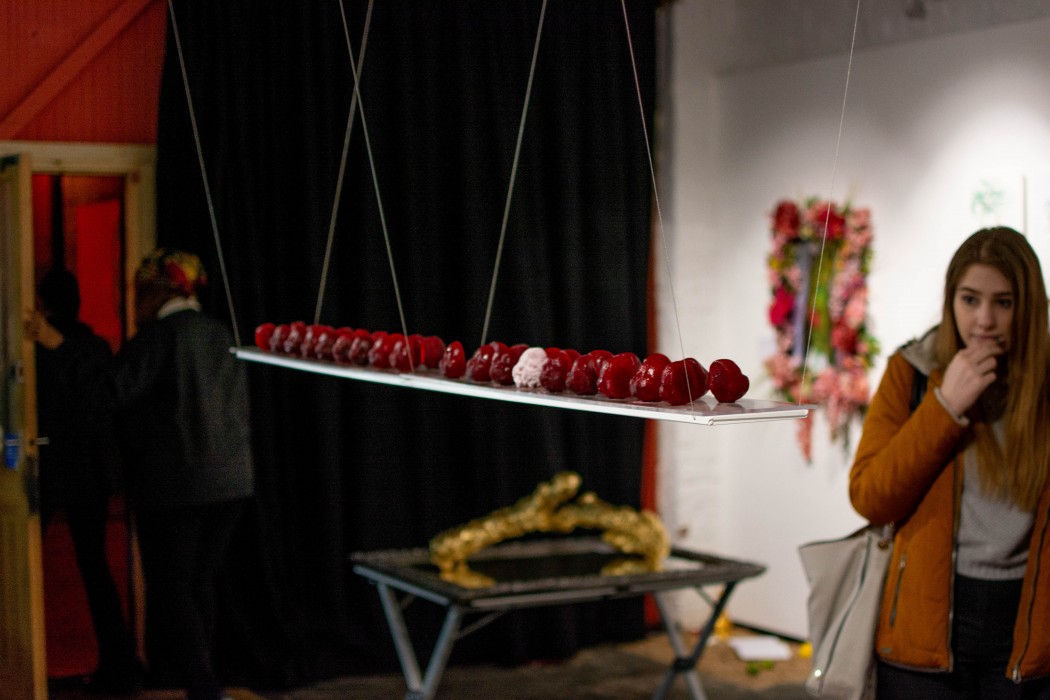 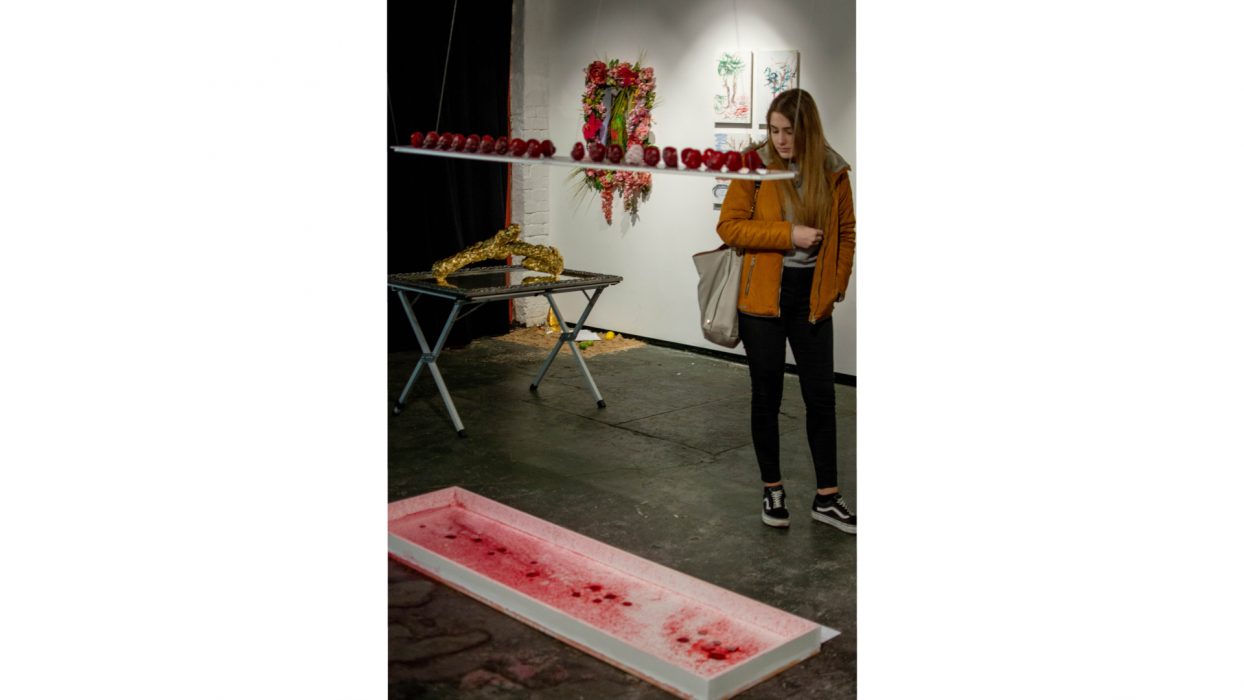 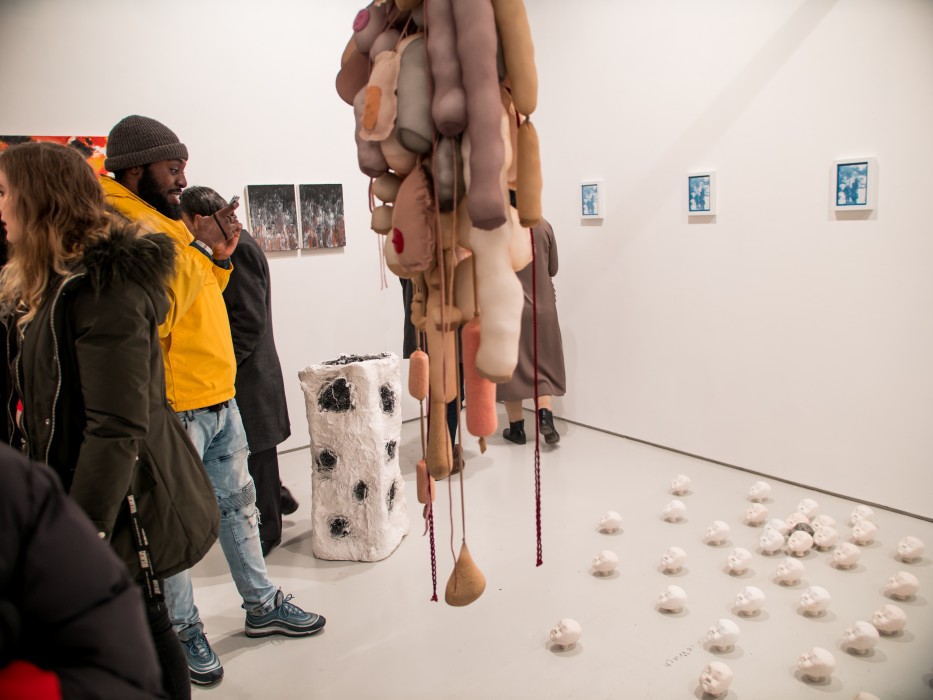