Unfortunately your browser is not supported. If you want to view this site you need to upgrade to a modern browser like Chrome, Safari, Edge or Firefox
Hanna Lampe
Design MA/MFA
Hanna Lampe
Of humanity´s urge to create visually and writing a novel
Design MA/MFA 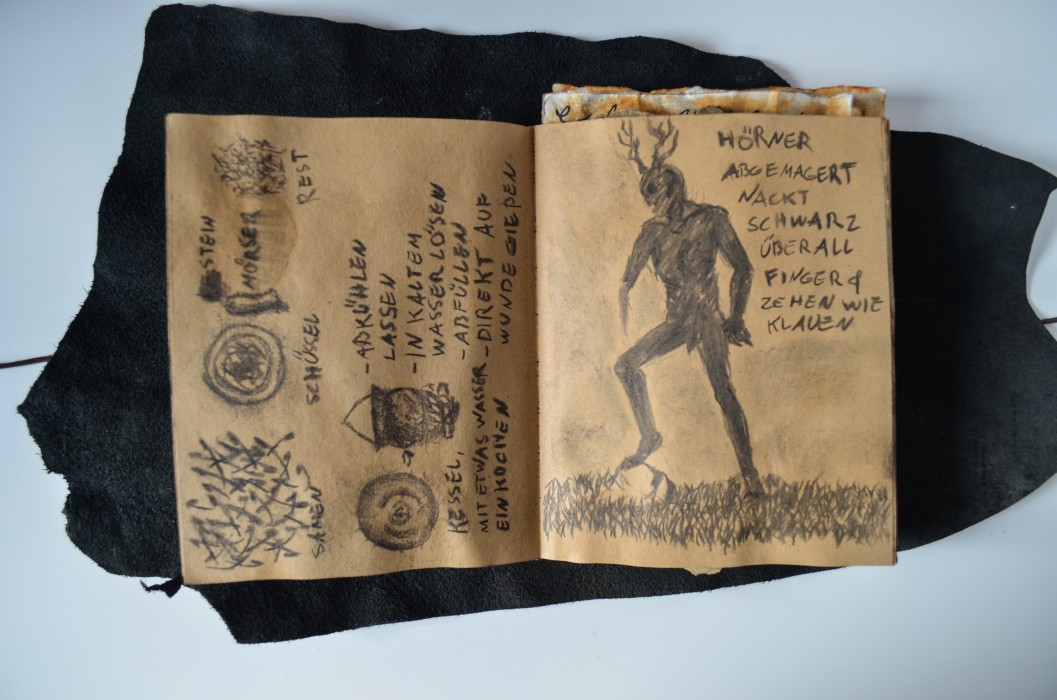 Of humanity´s urge to create visually and writing a novel

“Why do humans create (visual) art?”

At the heart of Hanna Lampe’s project is Schattenklage (Shadow Lamentation) the novel she is currently working on and wants to become an author with.

Though the novel isn´t done by far the project dives deep into the fictional world using immersive storytelling.

Written in the author´s mother tongue, German, Schattenklage is a medieval fantasy and its setting has informed the rough-looking final outcomes such as a sketchbook which is made by one of the protagonists, Bor.

Bor doesn´t only use the sketchbook to draw with charcoal but also to take notes about plants that have healing properties, how to process them or which plants are poisonous.

Lampe has dived deeper into her imagined world by creating a alphabet of a long disappeared culture which is a key to the plot of the story. With every rune not only a meaning in terms of a letter but also several symbolic meanings, which can be used in rituals to cast spells.

Using the fantasy alphabet, ink, and calligraphy paper Lampe has written a prophecy the protagonists will come across in the story. Elsewhere illustrations depict Schattenklage myths including a watercolor painting of a sea serpent who comes across a young woman on a rock in the ocean and a dragon who is about to eat a star or to be more specific the sun. 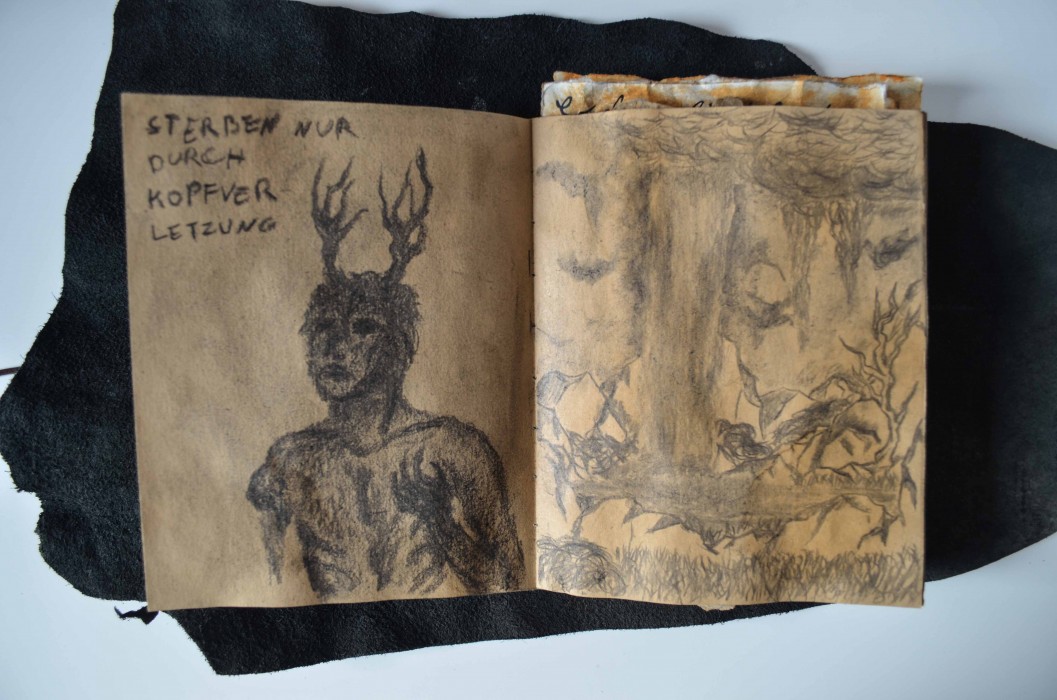 Bor’s Sketchbook
Charcoal on brown paper. . One of the characters, called Bor, who is a vagabond makes himself a sketchbook in which he records everything he thinks of as interesting, beautiful or important. 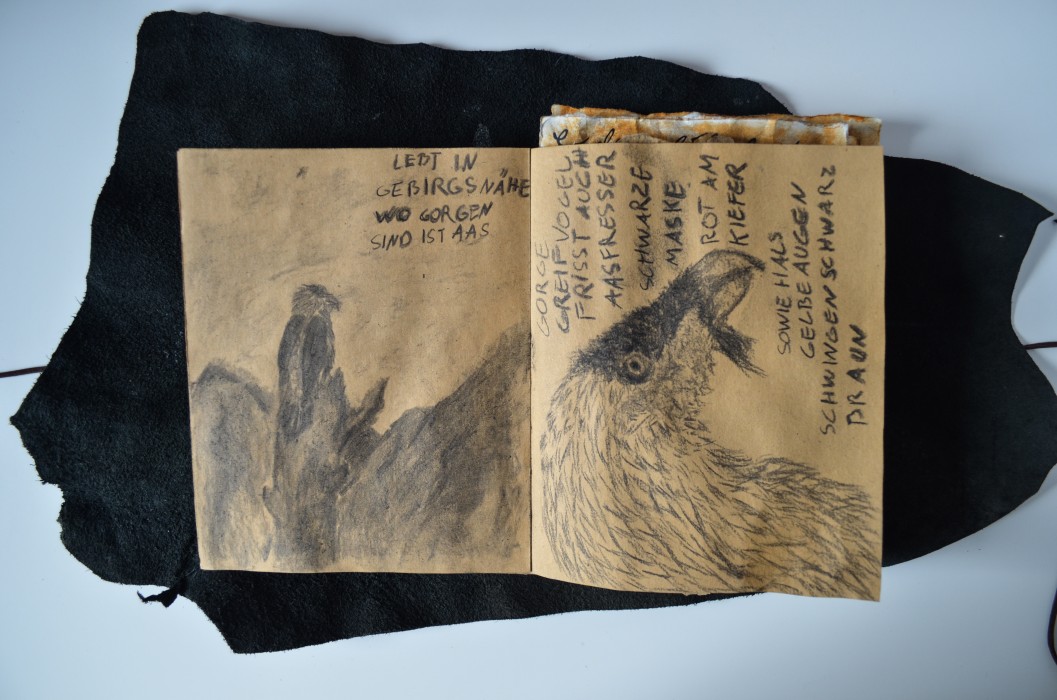 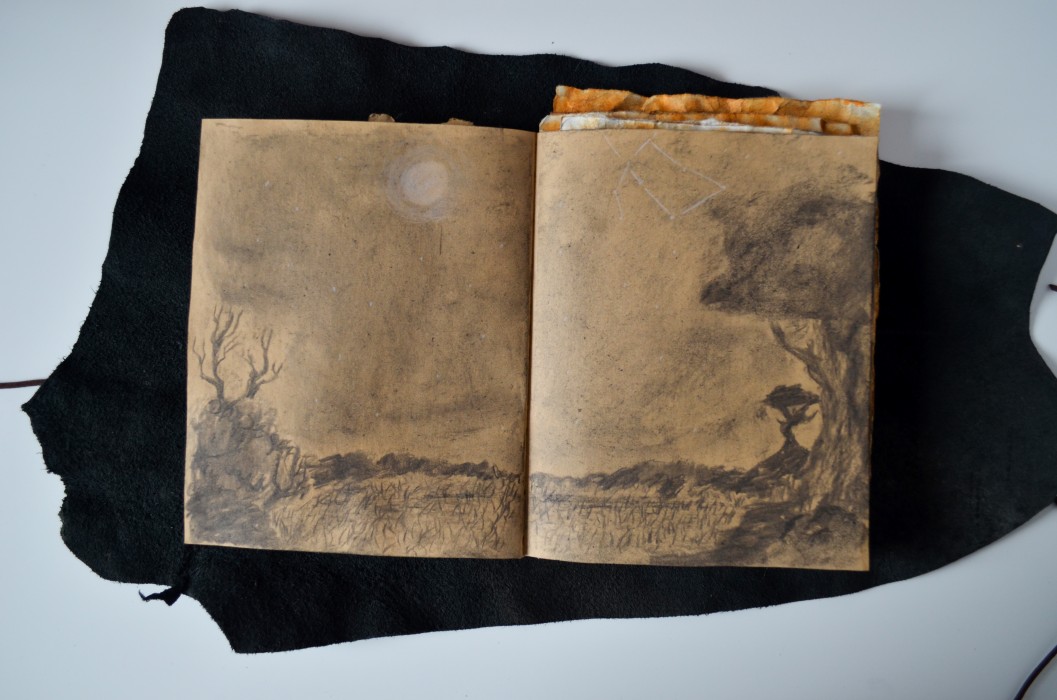 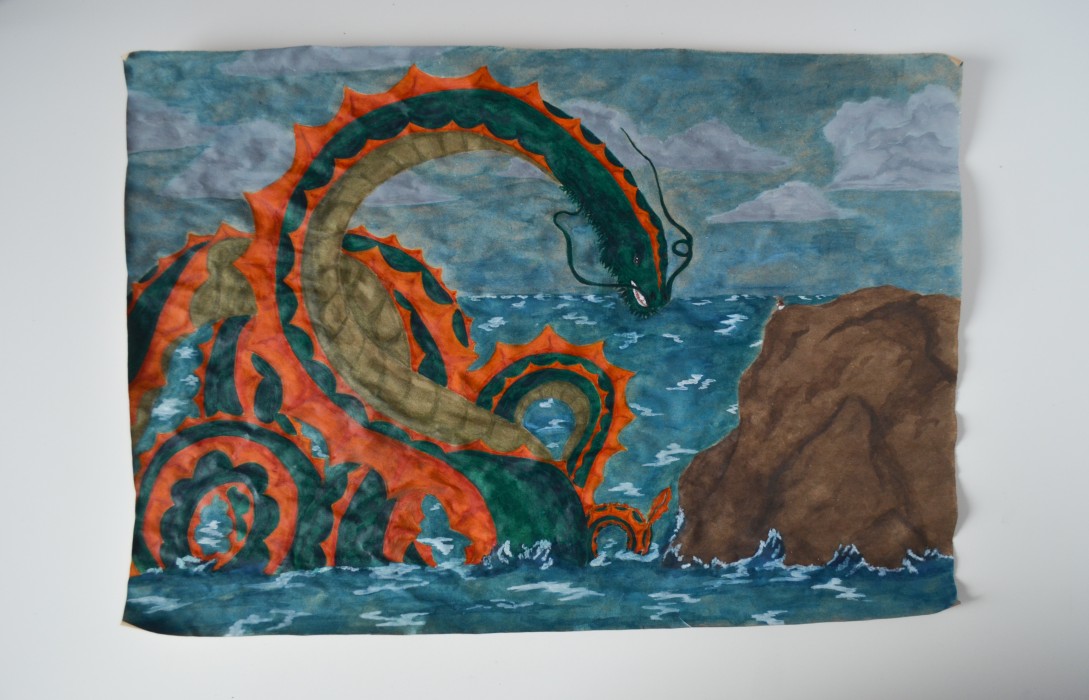 Narga and Horaqu
Watercolour on brown paper. Narga and Horaqu is a myth Bor hears about. It is about a sea serpent called Narga and a young woman called Horaqu. The scene on the painting shows the first time they meet 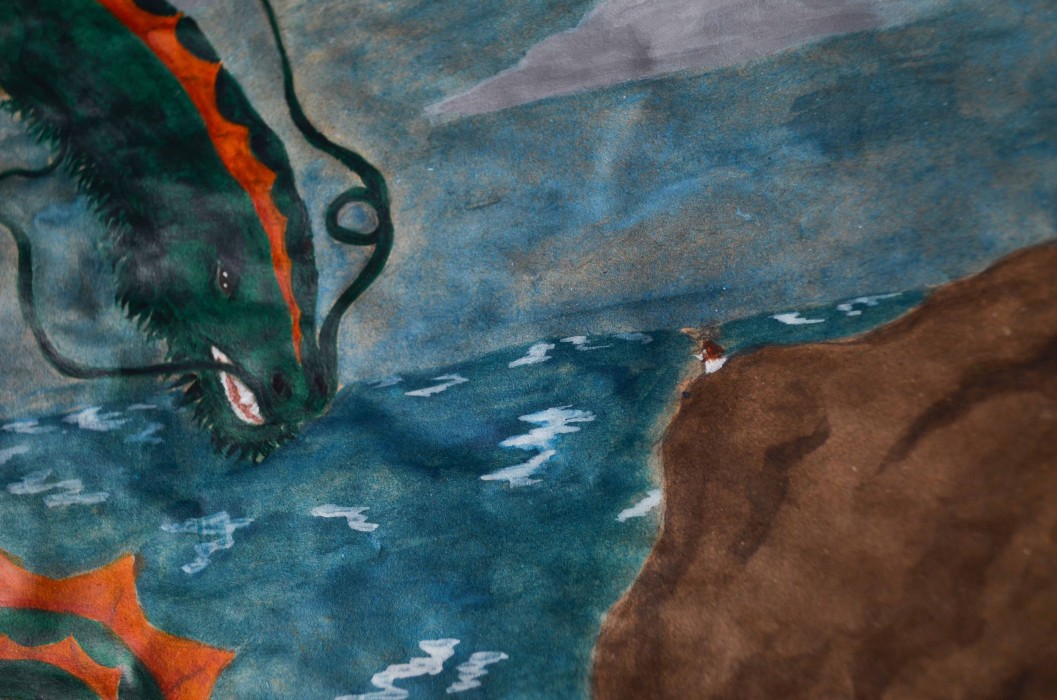 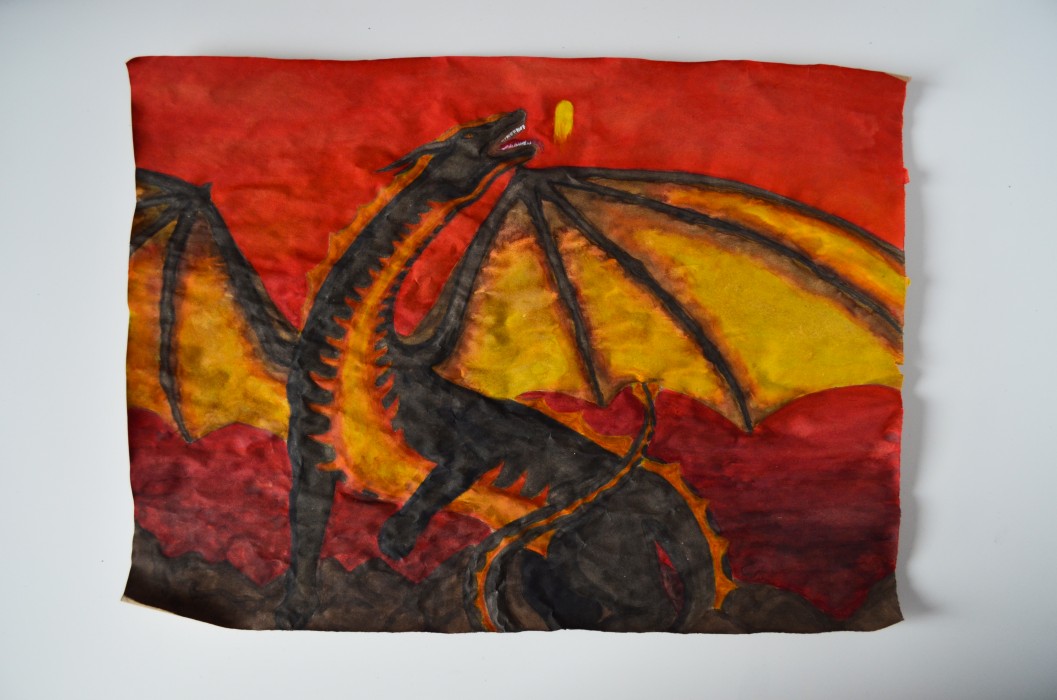 Karechk
Watercolour on brown paper. This painting is another myth Bor comes to know. It is about an ancient dragon called Karechk who disappeared. It is said that one day he´ll return and eat all the stars from the sky until there is no light left in the world. 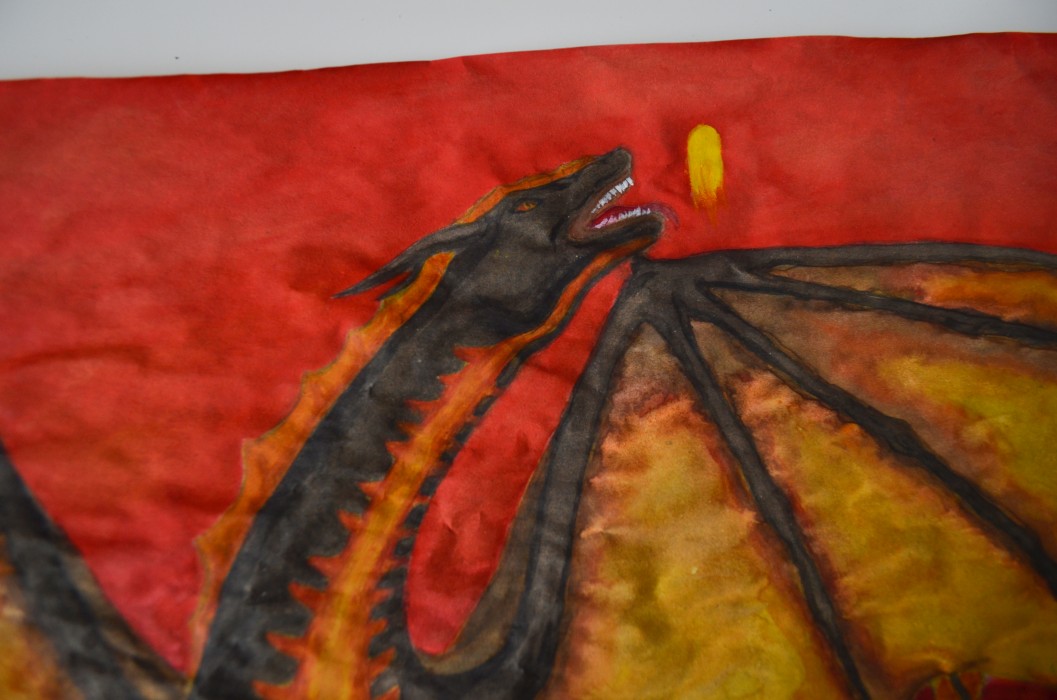 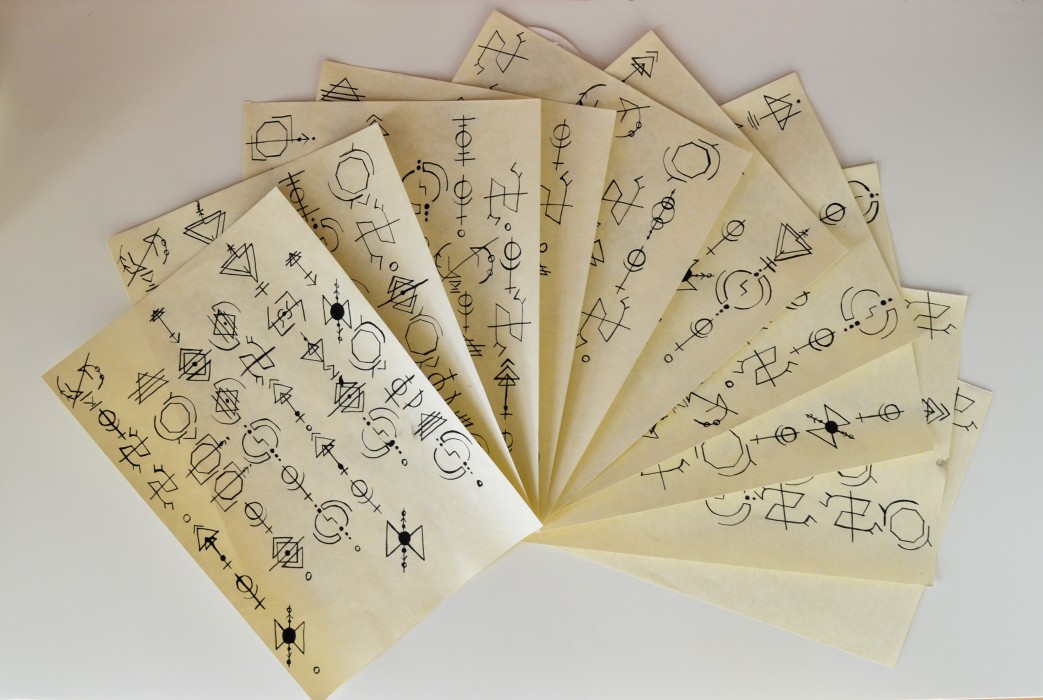 The Prophecy of The Wanderer
Ink on calligraphy paper. The prophecy oft he wanderer is key to the plot of the story. The protagonists find it but need time to translate it for the language is ancient and already forgotten. 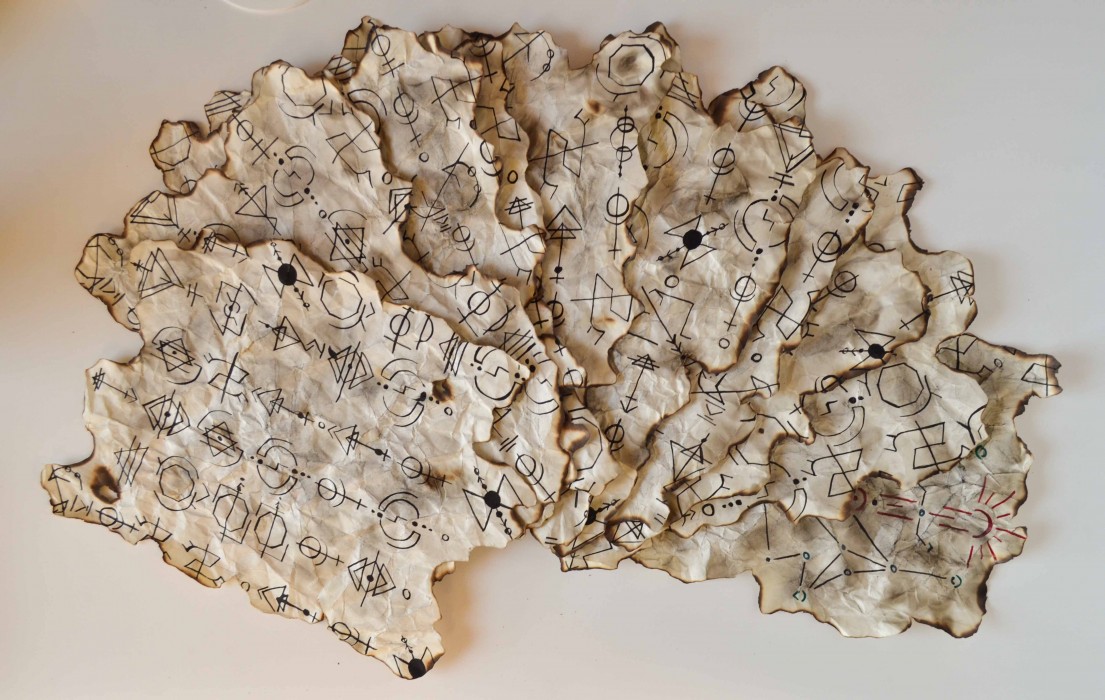